I just love the Thames and Westminster is one of my favourite places. Maybe it a bit of obsessive compulsive feeling for this area, but I do keep returning to it in my paintings. It's usually full of tourists during the summer months. So much to see. So much to do. The south bank, London Eye, the Tate, the Houses of Parliament, Whitehall, Trafalgar Sq., the National, the Mall and Buckingham Palace and many more places to go, to see, to paint.
Earlier this spring, I decided to paint a skyline of Westminster bridge and the Houses of Parliament but with a twist. I had a photo of a watercolour of Venice painted in a style similar to Charles Reed. My thoughts were to use that painting style on the upper buildings and blend this into the darkness of the river. Here is that early spring attempt. 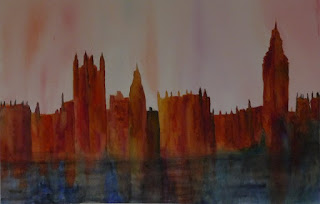 The buildings turned out OK but overall it was a bit of a failure. The Thames and Westminster Bridge disappeared into the blue gunk at the bottom of the painting. After some thought, I knew what I wanted and I knew that I needed to do a couple of value studies. 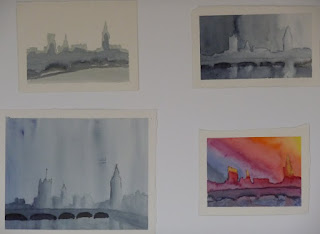 The first study (top-left) was a simple three value study. This solid, non-gradated study isn't going in the direction I wanted. The second study (top-right) with a gradation from right to left and somewhat from top to bottom exactly the image I wanted to paint. The third (bottom-left) done with a sky wash failed again. The last study in colour also is moving in the direction I wanted to go.
So I've done the studies and I know where I want to take the painting. Just a quick light sketch and I'm can start to sling paint. Right? Wrong! The original painting and the four studies stayed pined to the wall for 3 three months before I decided to take them down and have another go at this subject. I think it's an improvement over the original. I also think there is still room for improvement. Maybe I will revisit it in a couple of months and maybe I'll be happy with the results and maybe fish will learn to fly.  Enjoy 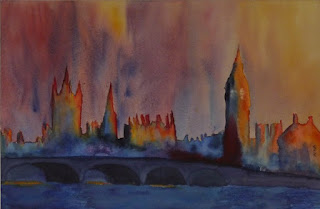 A few days ago, Kate Withers started a new thread on the Composition and Design forum of WetCanvas: 'breaking the rule of centering' (sic). She explained that she likes a centred composition and doesn't defer to the many art books and teachers that tell you not to centre your centre of interest. Kate included her recently complete painting 'Queen of Spades Range'. 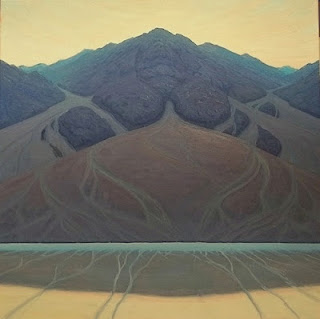 I was hooked at first sight. I just knew that I had to paint my vision of this scene. My compulsion was a slight overdose of Frank Lloyd Wright via a student of his: Milton Stricker and his online book on "Design through Abstraction – The Wright Source to Art and Architecture". If you are struggling as I am with trying to see and paint the abstract shapes of nature, I recommend reading this excellent publication. It's not all about art and abstraction, but the images alone make it a worth while investment of the time needed to traverse this document.
Google (Queen of Spades Range) turned out to be no help at all. Not a single photograph of this area which surprised me so I had to work from Kate's painting. I cropped the image she had posted and then stretched it back to a square composition. From this image I drew a light pencil sketch on 200# Saunders-Waterford CP watercolour paper. Using a ruler I straightened the curves with darker lines, some of which I extended beyond that lines of the original sketch. I then used some recently acquired Decocolor Acrylic paint markers to trace over the straight lines. I used red for the mountain and black for the lower slopes.
I turned the painting so that the sky was tilted downward. First a wash of water with just a hint of Raw Senna, followed immediately by another wash with a bit more Raw Senna and finally while still very wet, a third rich wash of Raw Senna. I then removed the tilt and encouraged the paint to granulate by shaking it slightly. It was then allowed to dry completely. The mountains got a similar treatment using Ultramarine Blue with some darker blues dropped in after the main washes. The foreground received a wash of Raw Senna with some darker yellows added to give contrast. I hope you like it. 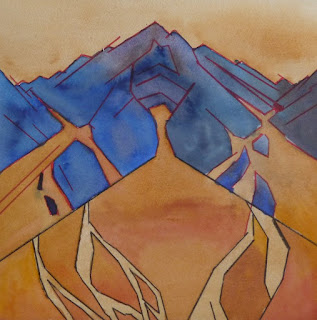 Posted by James Kissel at 4:47 PM No comments:

James Kissel
I'm a semi-retired, mostly self-taught watercolour painter. My return to art, after many years in a computing environment, was first working in Stained Glass. I took up watercolour painting to move my world view from left brain to right brain. Soon, I was only painting in watercolour. My art focuses on landscapes and cityscapes painted in the studio from photographs and 'en plein air' sketches.